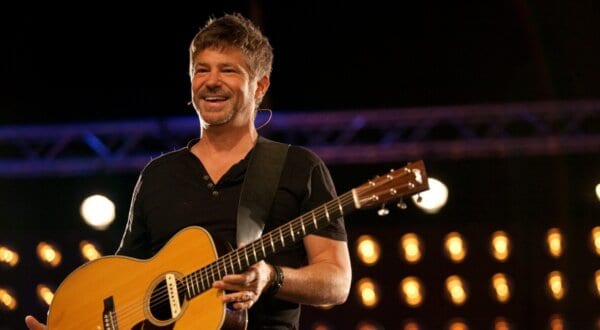 Paul Baloche songs, Paul first begun his interest in music after being introduced to the Beatles at an impressionable age. Growing up in French Catholic family, Paul Baloche learned how to play guitar during his Junior-high-school years. After high school, he performed in and around he southern New Jersey Club circuit, gradually graduating into Philadelphia and Atlantic City clubs.

At the same time, he met his wife Rita, a country & western singer. During this time, both baloche and his wife had born-again experiences and moved to california. Baloche studied music at the Grove School of Music where he met popular Christian musical artists such as Kelly Willard.

He created a series of small, independently produced live albums, there, including First Love. In 1992, Baloche released his label debut, He is Faithful, On Hosanna!Music. He has performed in Europe, Singapore, New Zealand, South Africa, India, among the artists.

Influenced and inspired by his work, the musician moved to Garden Valley, TX to work with the Last Days Ministries. While working there, he would pray with the fellow musicians before singing and creating such praise through song. After four years of working and creating , baloche and his wife relocated to California and became the music pastor of the Community Christian Fellowship.

He created a series of small, independent albums. Baloche also does speaking engagements in addition to his musical endeavors. In a 1998 interview with the Tyler Morning Telegraph, Baloche described his music career as “Journaling his process of his walk with the Lord”. He currently resides in Lindale, TX and continues to lead worship at Community Christian Fellowship, where he’s been serving since the early ’90’s.