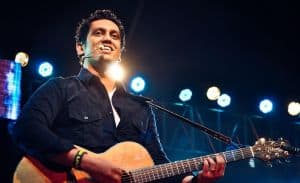 Sheldon’s skilled blend of East and West has caught the ears and touched the hearts of hundreds of thousands of believers in his Indian homeland and now the Mumbai-based worship leader, singer, songwriter, guitarist and producer, is impacting the international Church.

Sheldon was born and raised in the city of Mumbai. His family were nominally Christian and his parents sent Sheldon to Sunday school. However by his teenage years he had decided that  religion was boring. For Sheldon and his friends, Western music, particularly hard rock, became a far more fulfilling pursuit.

With some friends he formed a heavy metal band. Explained Sheldon, “The band were mostly Hindus, but not really connected to religion, not practicing their faith. When you’re playing in a band, I guess music is the only religion at that point. It was a heavy metal band.

We in India subscribe to a lot of things from the West, so we were into metal. I was a church boy, so I tried to keep away from the Satanic or anti-Christian music; but music is such that what you listen to you begin to act out. That’s the challenge. You feed your system good things it will give you good output !

On the stage, I felt like I was the unholiest among all the guys there: I was the only guy doing drugs and smoking and drinking. The Holy Spirit just moved in that prayer meeting and a lot of people were touched; the presence and the power of God was taking over that place. For me it was a very awkward but yet a very powerful moment. All my life I’d heard about Jesus. That day on 7th August 2004, my eyes were witnessing the reality.